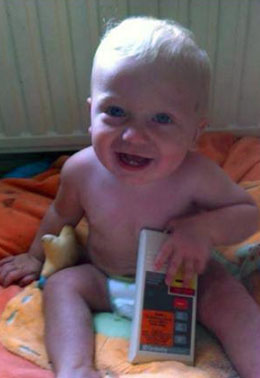 Ewan was a tiny premature baby boy, who due to an early birth suffered from a specific form of apnoea (stopping breathing) that could happen at any time, day or night.

Ewan, born prematurely at 34weeks, as can be seen by his mother’s note has made good progress too. We remember quite well, as if only yesterday, the monitor being dashed, one Sunday lunch-time, by members of NARA’s support team some 125mile round trip to a motorway service area for the mother to collect. And this was after the same NARA team had just arrived back to Northampton from Scotland via Liverpool!

Thankfully, the hospital doctors have been able to control and deal with his bouts of apnoea of prematurity episodes to the extent that there is no more need for him to use the monitor. Again, as his mother says, he’s now ‘a happy healthy toddler’.

‘Thanks to NARA we were able to rest assured that we would be alerted if Ewan stopped breathing. Our hospital refused to send us home with an apnoea monitor, even though he couldn’t go home without one. Almost 3 years on now and wehave a happy healthy toddler all thank to NARA and those people who donate to them. THANK YOU!’